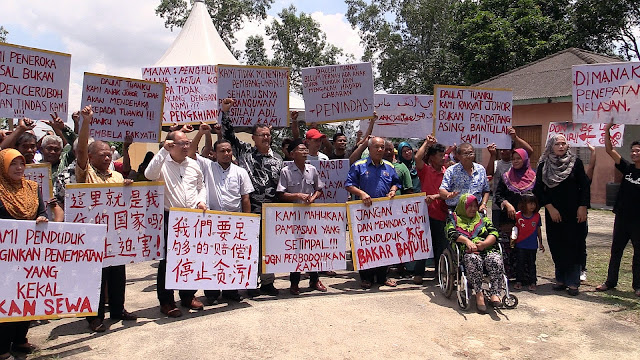 Johor Bahru, March 10, 2016: The residents of Kampung Bakar Batu, Perling Johor Bahru have demanded that they be treated fairly by the State government and the property developer who now owns the property that the village sits on. Speaking at a press conference organized to highlight their plight, village spokesman Norman Abdul Hamid said that there have been no discussions between the State government, the developer and the village working committee (JKK).

“The only people we have met have been the lawyers acting for the developer, Nodedua Sdn Bhd and there wasn’t any discussion, only them telling us ‘their instructions’,” Norman said.

Norman and the 70 residents who attended the press conference expressed dismay at the previous JKK and its chairman who they accused of letting them down by not having any discussions with the villagers on the proposals by the developer.

“All of a sudden, in early October last year, we were presented with an undertaking letter (Aku Janji) to vacate our homes of over 50 years for a miserly compensation of RM15,000 and to move to low-cost rented flats.

Of the 150 families living in Kampung Bakar Batu Perling, 18 have accepted the compensation and they have moved out to rented low-cost flats also in the Perling area.

Being in close proximity to high-value developments such as Danga Bay, any development promises to be of similar high value for wealthy foreigners and locals. Kampung Bakar Baru sits on the irrigation and drainage reserve of this spit of land and in reality falls under the country’s Irrigation and Drainage Department.

“This is one reason why our applications for temporary occupation have failed, but they seemed to have sold the reserve to the developer,” Norman said.

Norman and a few of the residents who spoke at the press conference reiterated that they were not against development, but they wanted to meet with the developer and State government representatives to discuss the way forward.

“The RM15,000 cash and relocation to rented flats are not fair compensations,” said Norman. He explained that more than half the heads of families here are full time coastal fishermen.

Amongst the suggestions put forward in the proposals was upgrading the village with better infrastructure, build replicas of traditional Johor houses, thus turning it into a ‘living’ museum. They propose that they live in these houses and help run the living museum.

“Some of us have ancestors who lived here when the Orang Asli were still living on their boats and that island across was their open burial ground,” said Norman, pointing to a once mangrove island, now turned into land lots for their buyers to build luxury homes.

Another proposal is for compensation of RM150,000 and a medium cost home per remaining family at a suitable location where fishermen and boat builders can still carry out their vocation.

The Orang Asli Seletar were allotted a reserve of about 14 acres within Kampung Bakar Batu with another two acres as their traditional burial grounds. “So I think we are deserving of more than RM15,000 and a rented flat,” Norman added. One of the properties that they have identified for relocation is just adjacent to the Orang Asli settlement of about nine-and-a-half acres.

Also present at the press conference was Cheo Yee How, the state assemblyperson for Pengkalan Rinting who promised to bring up their plight in the next State Assembly sitting. The village falls under his State constituency.
Posted by Satria Asia at 6:40 AM